Barça have done it! The Spanish side rewrote the EHF FINAL4 history books last weekend, becoming the first team to lift the trophy in two consecutive years in Cologne.

The triumph marked Barça’s record-extending 10th EHF Champions League title in total – and it happened after only the second final at LANXESS arena that went into a penalty shoot-out. Opponents Lomza Vive Kielce had also been involved in the first shoot-out – in 2016, though they had won that one.

Here are five talking points after the EHF FINAL4 Men 2022:

What is the secret behind the success of Barça? No superstar, no special tactics, still the best. Having lost Aron Palmarsson, Raul Entrerrios, and Cédric Sorhaindo after winning the EHF Champions League in 2021, and with Carlos Ortega replacing trophy collector Xavi Pascual as head coach, Barça went into a transition. In the group phase, they had many ups and downs, but when it counted, they were there. Barça remained unbeaten in their last nine matches and won each match in the knockout phase. The final victory made up for the loss at home against Kielce in the group phase, ending a siy-year unbeaten status in EHF Champions League home matches.

AND… BARÇA 💙❤️ is the EHF CHAMPIONS LEAGUE WINNER for the 10th time!

Barça count on a strong goalkeeper – Gonzalo Pérez de Vargas – and a stable, movable defence with Thiagus Petrus & Co. in the middle block. With the two best scorers of an EHF Champions League season – Aleix Gómez and Dika Mem, both left handers – in the line-up, the attack is efficient. But, the little things were decisive in the end, like replacing injured Luis Frade with Youssef Benali, or finding a solution when Luka Cindric got injured in the semi-final. Ortega won his seventh EHF Champions League trophy – but the first as coach.

“Alex is the best, the best for me as a coach and as a father.” Talant Dujshebaev used strong words for his son, who was the unluckiest person in the LANXESS arena on Sunday night. He was the only one to fail in the penalty shoot-out – after an outstanding performance in the semi-final and the final. Kielce have a similar stable and wide squad as Barça, but as only one team can win the trophy, it was this one shot that decided the final.

Artsem Karalek was awarded MVP, Andreas Wolff was a brilliant goalkeeper, Igor Karacic was a mastermind in the semi-final, Arkadiusz Moryto was cold as ice from the wing and the penalty line. By bringing in some more fresh blood like French Olympic champion Nedim Remili, Kielce will be even stronger in the future. From their playing style and the fan support, the Polish champions would have deserved the trophy just as much as Barça do. 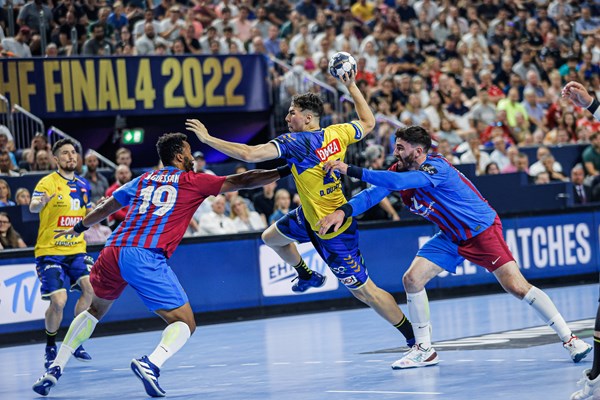 The 34:30 semi-final defeat against eventual champions Barça was not Kiel’s best match of the season – and head coach Filip Jicha knew it. “We would have needed a peak performance to make it to the final,” he said. Kiel lost injured key players Sander Sagosen and Hendrik Pekeler shortly before the EHF FINAL4 and signed good-old Bjarte Myrhol as a short-term replacement. In the end, the absence of the duo was too much to cope with for Kiel.

But the German side, the last EHF Champions League winners before Barça’s double – in 2020, rose like a Phoenix in the ¾ placement match, turning a four-goal deficit around and win in a penalty shoout-out. “The moral of this team is incredible,” Jicha said.

Yet another visit to Cologne ended without the coveted trophy for Telekom Veszprém HC. Still, they can look back at a strong season, in which they defeated eventual champions Barça in the group phase, came close to beating Kielce in the semi-final, and even closer to downing Kiel in the third place match. 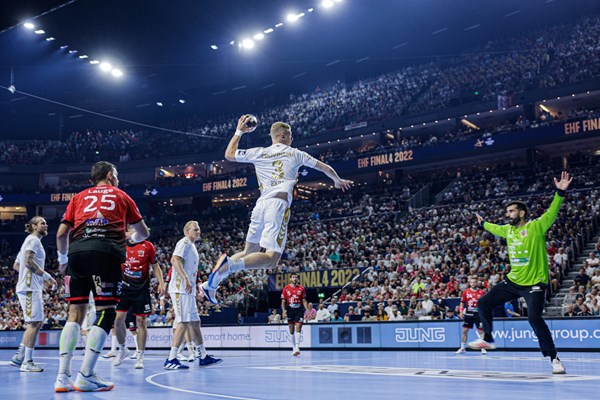 In his first season as head coach, Momir Ilic has implemented a new style of playing, giving the team additional confidence compared to last season, when Veszprém lost in the quarter-finals. Signing some interesting players, such as Icelander Bjarki Mar Elisson, will give Veszprém hope for a successful future at Lake Balaton. “We will be back next year”, was Ilic’s promise.

Three matches at the EHF FINAL4 2022 each featured 72 goals – and the same result: 37:35. Add a 34:30 from the semi-final, and the total number of goals last weekend reached 280 – a new record for Cologne. The goal feast was witnessed by a sold-out crowd in LANXESS arena again: 20,000 fans each day and a brilliant atmosphere on the stands. So, it is good news that the EHF FINAL4 will stay in Cologne for at least two more years until 2026.

Next Article Secure your ticket for the EHF FINAL4 Men 2023

Wiederer: “Cologne is the perfect platform”

FEATURE: The president of the EHF praises the 2022 edition of the EHF FINAL4 Men, and reflects on the various EHF club competitions

DRAW REVIEW: The 16 teams in the EHF Champions League Men have learned their opponents for the new season

DRAW REVIEW: The 16 teams have been divided into two groups for the start of the 2022/23 top flight in September

DRAW PREVIEW: Groups for both the men’s and women’s edition of the EHF Champions League 2022/23 will be set on Friday

DRAW PREVIEW: The 16 teams in the EHF Champions League Men 2022/23 will learn their opponents on Friday

How the women’s teams are seeded for Friday’s draw

DRAW PREVIEW: The two eight-team groups for the EHF Champions League Women 2022/23 will be drawn on Friday