The opening day of main round play at the Beach Handball EURO 2021 in Varna has shed a clear light on the quarter-final line-up in the men’s championship.

Seven of the eight places for Saturday’s first knockout round have already been confirmed as all 12 teams are left with just one more main round game on their schedule.

Among the teams advancing are title holders Denmark, Spain, Croatia, and Russia.

The women’s championship is obviously a different story, with all teams having to step on the sandy courts two more times, leaving a lot to play for before the main round closes on Friday. 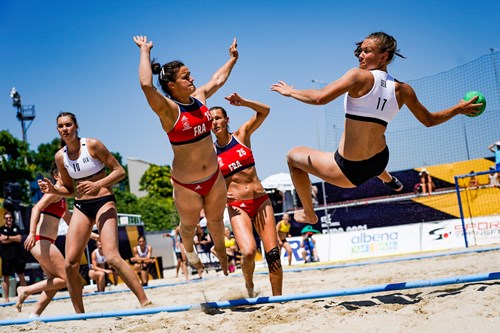 In the men’s event, the teams through to the quarter-final are:

The women’s event includes only two teams that are still unbeaten at these championships: Norway and Germany, with the latter being the only side having yet to drop a single set.

Still, Denmark are joining Norway on the maximum six points in group I, though the defending champions stumbled once in the preliminary round – against Ukraine, who then failed to qualify for the main round.