Dujshebaev: “Everyone has a chance to make history"

The EHF Champions League is celebrating its anniversary, the competition has entered its 30th season. And few are more suited to talk about the development of this competition from 1993 to today than five-time winner: Talant Dujshebaev. At the end of the inaugural season in 1994, the native Kyrgyz was on the podium as a TEKA Santander player, in 2006, 2008 and 2009 he steered Ciudad Real to the title as a coach, in 2016 he triumphed with Lomza Kielce and in 2022, Dujshebaev lost the dramatic final with the Polish club after a penalty shootout against Barça.

On Thursday (20:45 CEST) Kielce and Barça clash again in the Machineseeker EHF Champions League for the Match of the Week in Round 2. In this interview, the 54-year-old two-time world handball player of the year, looks back on the development of the EHF Champions League and ahead to the anniversary season, in which the Truckscout 24 EHF FINAL4 in Cologne is again Kielce’s big goal.

Kielce took a clear opening victory against Nantes last week, how strong is Kielce in the new season?

Talant Dujshebaev: Since 2017, we have been building a team for the future, with new players, including many talents. We had a lot of wins and defeats together since then, I am sure we are on the right track for the future because we have a good mix of experience and young, hungry players.

Does that automatically mean your goal is the Truckscout 24 EHF FINAL4 in Cologne?

Talant Dujshebaev: Seven to eight teams can qualify for Cologne and everyone knows that anything can happen when you are in Cologne. I count our team among these teams - and also among the favorites alongside Barcelona, ​​Veszprem and Kiel. But Paris and Aalborg can also do it, and teams like Plock and Dinamo Bucharest have very high ambitions. The number of candidates for Cologne has grown in recent years. Therefore, it is getting harder to ´reach Cologne year by year.

How did your team cope with this year's dramatic final defeat against Barça in June?

Talant Dujshebaev: To be honest, it took a while, at least two or three weeks. But the longer it took, the better it got. When we started our pre-season, it was all over. We have new goals, new expectations, new dreams, everything is new. We know that last season we fought really well until the end, we had great moments, we gave everything, but as I said: anything can happen in Cologne, we experienced that once again.

Barça did not have many changes in their squad but even bolstered their roster by signing strong Scandinavians such as Hampus Wanne, Jonathan Carlsbogard and Emil Nielsen. So do you think Barça are the big favorites again?

Talant Dujshebaev: They won the trophy twice in a row in Cologne, something no other team had managed to do before. That fact only underlines how strong Barcelona are - and yes, they have a better squad than last year. In addition, coach Carlos Ortega is now in his second season, he has had his experiences, he has achieved success - and I think the new season will be much easier for him. But Barcelona are not the only favorite for me: Despite the injuries of Sander Sagosen and Hendrik Pekeler, Kiel started strongly, in Bundesliga and Champions League. I also rate Veszprém much better than last year - those are my three favorites for the EHF FINAL4.

What stands out is the depth of Kielce’s squad - is that a key to success?

Talant Dujshebaev: It is important for every coach in the Champions League to have all positions filled well at least with two strong players, because there are always absences, not just long-term injuries, but often some short-term ones. Like in the last season: SG Flensburg-Handewitt had a great team, but they had so many injuries that sometimes they could only play with seven or eight players, given the double burden of the Champions League and the Bundesliga. That was a great pity for them. In the Champions League you have to be able to compensate and plan for something like that - and that's why you need a broad squad.

If you look back 12 years, how important was the introduction of the EHF FINAL4 for the development of the competition. After all, with Ciudad Real you had twice previously won the old version with two finals?

Talant Dujshebaev: You can only congratulate those responsible at the EHF on this decision, they did everything right. Thanks to the final tournament in Cologne, the Champions League has made a giant step. The tournament is a huge spectacle for the media, spectators and players. I think only a few sports have such a tournament as the FINAL4 in Cologne. This event is even bigger than the EuroLeague basketball final tournament.

But personally, I think it is a pity that the tournament always only takes place in Cologne, even if the organisation there is of course absolutely perfect. I could also well imagine playing in Budapest, Paris or Zagreb one day. But in general, this tournament is the centre of the handball world for three days, which is why other sports envy us.

When you look back on Cologne, the incredible 2016 final against Veszprém is probably your personal highlight, right?

Talant Dujshebaev: Yes, of course, what we did there was unbelievable. After 47 minutes we were nine goals down, then we won the penalty shoot-out and achieved this miracle. But: for me, the 2022 final was also an incredible experience, even though we ended up losing on penalties. I think my team was even better than in 2016, in the end we missed a single goal, we were not lucky enough, but that is handball.

Do these close and sometimes unexpected results make the EHF FINAL4 in Cologne particularly attractive?

Talant Dujshebaev: It is all about these sensations, yes. Our victory in 2016 is an example, like Hamburg won in 2013, Flensburg in 2014, then the two triumphs of Vardar or the one Montpellier won - that makes this tournament so special for the world of handball. Anyone can win when they are in Cologne, everyone starts with a 25 per cent chance. It is all up to you to make history with two games in 27 hours. But as I said: First you have to qualify, then anything can happen.

Going back to the 2008 and 2009 finals against Kiel, both of which you won with Ciudad Real - were those moments just as magical?

Talant Dujshebaev: Twice the best teams in the world at the time played for the trophy in two finals, and twice we had the happier ending. Those were very special games - and both teams deserved the title. But to be honest, I am someone who prefers to look ahead rather than looking back - and I am looking forward to what is to come. My motto: the best time is still ahead of me.

But was that Ciudad Real team at the time the best you've ever coached?

Talant Dujshebaev: We had an incredible team, that is true. But someone else might say: Talant, your best team was the Kielce 2016 team, and I say: “Maybe, let us say that the Kielce team of 2022 until 2026 was the best. I want to take a final balance of that at the end of my career, not now. Everyone has the chance to make history, and maybe we will win the EHF FINAL4 in Cologne again with Kielce, maybe in the next five or six years we will have the best team in the world. But yes: namewise, 2005-2009 was the best time, but we will have to see what comes next.

From 1994 to 2001 only Spanish teams won the EHF Champions League, what made the Liga Asobal so strong at the time?

Talant Dujshebaev: Spain and Germany had the best leagues in the world back then, and in Spain of course there was Barcelona above the rest, winning five titles in a row. I take Zagreb, they lost five finals, they were always close to it back then, Veszprém are currently in a similar situation. Then, with Ciudad Real, we managed to put Barcelona behind us in domestic and international competitions. Back then we had excellent opportunities in Spain, today it is all different, there's only Barça, ​​the league has become weak.

Today, France has the strongest league alongside Germany - and this is also reflected in the fact that so many different German clubs - Kiel, Magdeburg, Flensburg and Hamburg - have won the Champions League. Clubs like Santander, Portland San Antonio or Ciudad Real are now history. And on the other hand we have clubs like Barça, ​​Kiel, Veszprém and also Kielce with a very long history, they have always been at the top for 50 years. And I have respect for these clubs, which have always stayed at the top - and that's why I'm so happy that a traditional club like Magdeburg is back in the Champions League. 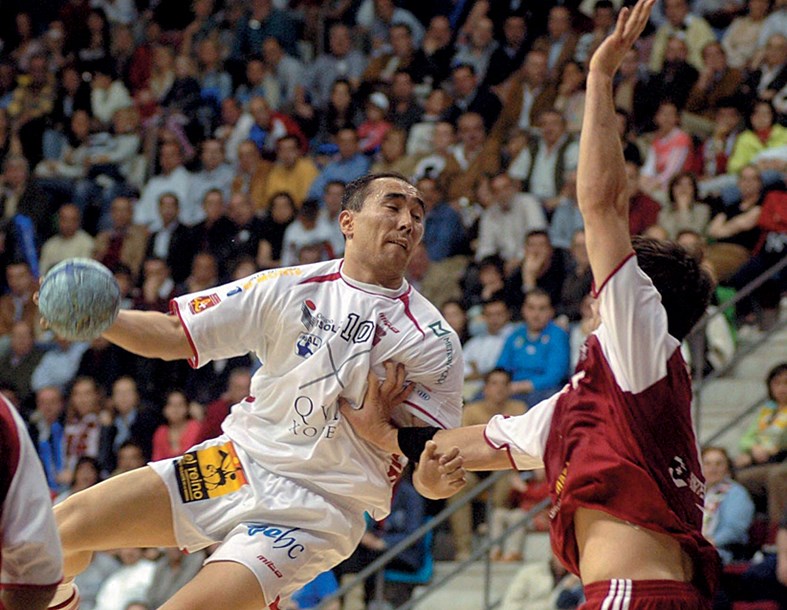 In the near future, northern Europe powerhouses aim for the top of the EHF Champions League - what chances do you see for clubs like Aalborg from Denmark or Kolstad from Norway?

Talant Dujshebaev: They have every chance of finishing among the top five or six clubs and also qualifying for the EHF FINAL4. First of all, these are projects like Vardar, but there is a huge sporting and economic potential in Denmark and Norway. They have great teams with great coaches, these are two unbelievably strong clubs that will definitely be a force to be reckoned with in the future.

Finally, a look back at the beginnings of the competition: How important is your only Champions League title as a player, in 1994 with TEKA Santander, right in the first Champions League season?

Talant Dujshebaev: Unbelievable, we had two tight finals against ABC Braga, we were so happy. It was my best moment as a club player - and of course I still remember the date: It was 30 April 1994 when we won the second leg and lifted the trophy. After that I hardly played in the Champions League anymore - as only one club per country was allowed to start back then. In those times, Barcelona was the measure of all things and therefore no other Spanish club had a chance to play in the Champions League. Looking back, I often think back to the 2005 final, my last Champions League match as a player, even though we lost to Barcelona with Ciudad Real. It came full circle - and I took over the team as coach. A year later we won for the first time.

Next Article Kielce out for final revenge in MOTW