Aalborg’s ambitions now loftier than ever

2021 has been one hell of a year so far for Aalborg. With remarkable signings and even more remarkable results on court, the Danish champions have become one of the standout stories in the handball world and they deserve it.

With a bolstered squad and self-confidence through the roof, where will this season’s adventure take them in the EHF Champions League Men?

Aalborg’s run to the final of last season’s EHF Champions League was nothing short of stunning. The Danish side won many plaudits as they battled through the knockout rounds, while also creating giddy excitement for the future as they announced the signings of Aron Pálmarsson for this season and Mikkel Hansen next season.

But the current crop of players wanted to make a name for themselves already and they did that by reaching the final. Now that Pálmarsson has arrived, alongside Jesper Nielsen, Martin Larsen and Kristian Bjørnsen, external expectations are higher but the players are not shying away from the challenge.

“Last season made us hungry for more. I have a huge motivation to get to the EHF FINAL4 in Cologne once again and show that it was not a coincidence that we made it this far. We want to win Champions League,” says club captain Rene Antonsen.

Under the spotlight: Aron Pálmarsson

Icelandic superstar Aron Pálmarsson has chosen to move to Aalborg for what could well be his peak playing years. At 31, the back court player has shone for club and country but often while managing injuries. He appears to have settled into his new club nicely at this early stage and it will be fascinating to see what role he takes within the team. 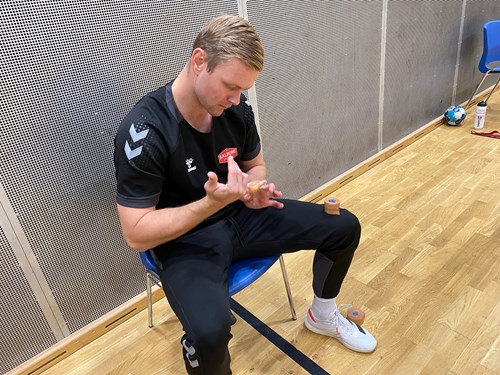 On paper, he should fit in beautifully with Aalborg’s back court players and be given a chance to use his array of passing and shooting weapons. Pálmarsson has a magic touch for stepping up and deciding games, which could be the final piece of the puzzle for Stefan Madsen’s team.

“We want to follow up on the fantastic result from last season and show that we can be a permanent part of the best teams in Europe. We know that it will require even more of us to do it this season, because the moment of surprise is gone, and people know us now as a result of last season’s second place.

“We are not afraid to set high standards for ourselves, because we see ourselves as a part of this. We are proud to represent the club, city and Danish handball on the biggest stage, and we look forward to a new exciting season.”

Aalborg are not shy about recognising brilliance at a young age and it shows in their hall of fame. Sander Sagosen was inducted at the age of 21 and Magnus Saugstrup became the latest member of the club at 24. Interestingly, Saugstrup was the sixth player to be inducted but the first Dane, following four Norwegians and a Swede.

Aalbord defied the numbers last season, so it feels wrong to make much of a reference to it here. Prior to last season’s campaign, their best result was elimination in the Last 16. This is early days in a whole new phase of history for the club.

Summary: Barça win but some favourites stumble in round 1

SUMMARY: Coverage of the eight matches in round 1 of the EHF Champions League Men 2021/22 group phase

QUIZ: 12 questions to test your knowledge of Europe's top-level club competition right before throw-off of the 2021/22 season