The second season of the EHF European League Women starts with 39 teams aiming to reach the competition’s final in the middle of May 2022.

Based on the seeding list released by the European Handball Federation, the clubs of M. Mosonmagyarovari KC (HUN), Viborg HK (DEN), CS Minaur Baia Mare (ROU) and Lada (RUS) go straight to the group phase and enter the competition only on 8/9 January 2022 when the stage’s first round will be played.

The defending champions of Nantes Atlantique Handball, who have been renamed to "Les Neptunes de Nantes", have been seeded to qualification round 3 and will start their campaign on 13/14 November 2021. 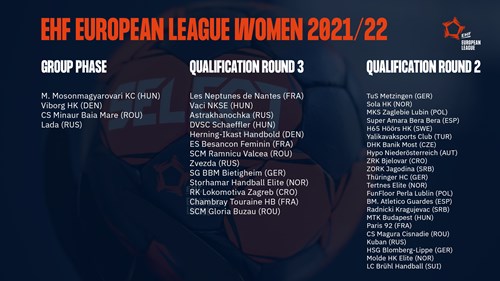 They are joined by an additional 12 teams, including last season’s EHF Finals participants Herning-Ikast Handbold from Denmark as well as Nantes’ French league rivals ES Besancon Feminin and Chambray Touraine HB, which also start in qualification round 3.

Consequently, 22 clubs open the competition in qualification round 2 which is scheduled for 16/17 October 2021 (first leg) and 23/24 October (second leg).

There are no matches in qualification round 1. Compared to the 2020/21 season with 34 registered clubs, in total an additional five teams take part in the EHF European League Women 2021/22.

The draw for all matches in qualification round 2 and 3 will take place on 20 July at 11:00 CEST at the EHF in Vienna. A live stream will be available on Youtube and Facebook.

Following six rounds of group phase matches in January and February 2022, the quarter-finals take place in the last week of March and the first week of April.

The season’s EHF Finals Women are scheduled for 14 and 15 May 2022. The bidding process for the tournament’s hosting club will start in due course.

Aguinagalde puts Irun back on track

GROUP A REVIEW: Milos Vujovic shone against Presov as Füchse Berlin made it two wins from two matches

GROUP C REVIEW: PAUC remained competitive for 30 minutes in Germany, but SC Magdeburg again proved too strong for their opponents on Tuesday…

La Rioja redeem themselves at home

GROUP B REVIEW: After scoring 39 in round 1 in Chekhov, GOG scored 46 against Cocks to earn a second victory

GROUP B REVIEW: Two wins out of two for Portuguese side despite Chekhovskie comeback

Plock in full control against Toulouse

GROUP A REVIEW: Thanks to eight goals from Michal Daszek, the Polish runners-up took their second victory by beating Toulouse