Kiel and Barça to feature in spicy MOTW

One of the all-time classics in the EHF Champions League Men will be the Match of the Week in round 7, as THW Kiel against Barça has been announced as the featured game this week.

The two teams that have left so many marks on the rich history of the competition will face off on Thursday 19 November at 18:45 CET in the Wunderino-Arena in Kiel.

The match will be streamed live on EHFTV, with English commentary from Tom O’Brannagain, and the MOTW tag further includes extensive on-court and behind-the-scenes coverage on EHF's social media channels before, during and after the game.

Kiel and Barça have fought many intense battles

Barça’s status as the only team not having dropped a single point this season will be put to a firm test in Germany on Thursday.

Fourth-ranked Kiel have conceded three points so far following a defeat to HBC Nantes and a draw with Telekom Veszprém HC - both in home games.

The impact three-time winners Kiel and record eight-time champions Barça have always had on the EHF Champions League is probably best illustrated by their position on the all-time standings of the competition, with the German side in third and the Spanish team on top.

Kiel and Barça have fought many intense battles against each other through the years, resulting in a pretty balanced head-to-head comparison. 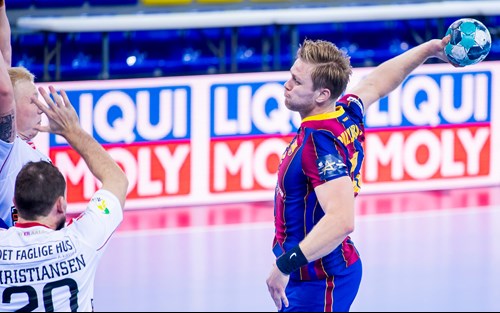 Thursday’s contest will be a special one for Kiel coach Filip Jicha, who played for Barça (2015-17), as well as for Barça centre back Aron Palmarsson, who wore the Kiel jersey for six seasons (2009-15) in the past.

Kiel and Barça are set to clash again in round 8 just one week later, when the reverse fixture is scheduled in Palau Blaugrana.

What makes Thursday's MOTW even spicier is the fact that both teams will take part in the VELUX EHF FINAL4 2020 next month.

And as they won’t meet each other in the semi-finals on 28 December, there is a chance they might end up playing for the 2019/20 title the next day.

GROUP A REVIEW: The French champions took another win after yet another tough battle against Porto

INTERVIEW: Creativity is what characterises the Ramnicu Valcea playmaker, on court as a player and away from the courts as a singer