The EHF European League Women 2020/21 is heading into an appealing group phase in its inaugural season.

Each of the 16 teams learned their three opponents for the group phase during the draw at the EHF offices in Vienna on Thursday.

The action in all four groups starts on 9/10 January 2021. In six rounds, all teams will play at home and away against each other before the top-two ranked teams in each group qualify for the quarter-final in late March. 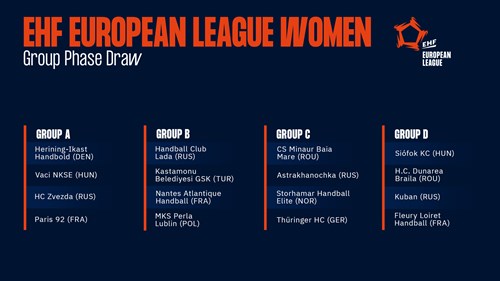 With many big-name clubs on the starting grid for the competition’s first group phase, one of the intriguing prospects is that three of the four groups include a duel between teams from Russia and France.

In group A, former EHF Champions League winners HC Zvezda will face Paris 92, with Danish side Herning-Ikast Handbold and Vaci NKSE from Hungary completing the line-up.

Handball Club Lada are headlining group B and will take on Nantes Atlantique Handball, while they are joined by Kastamonu Belediyesi GSK from Turkey and former EHF Champions League contenders MKS Perla Lublin from Poland.

And in group D, Kuban are up against Fleury Loiret Handball, while Siófok KC - the Hungarian winners of the EHF Cup 2018/19 - and Romanian side H.C. Dunarea Braila will also battle for a quarter-final berth.

There is only group without Russian-French duel, however, group C also includes a team from Russia as former EHF Champions League participants Astrakhanochka are set to take on two other teams that featured in Europe’s top flight recently - Romania’s CS Minaur Baia Mare from Romania and Germany’s Thüringer HC - as well as Storhamar Handball Elite from Norway.

While the focus in women’s handball will now turn to the EHF EURO 2020, starting in Denmark in a week’s time, the month January looks very promising on club level again, with the DELO EHF Champions League resuming and the European League entering an eye-catching group phase.

Next Article A new approach for Hungary

Lublin and Nantes clash for group B lead

ROUND PREVIEW: Five games will be played this weekend as part of round 3 in the European League Women

A hint of samba in Braila

FEATURE: Tamires Morena Lima has found her second home in Romania and plays a key role on and off the court

NEWS: Overview of matches that have been postponed and (will be) rescheduled in the EHF European League Women 2020/21

European League Men back in action in February

NEWS: Most of the matches that were postponed in earlier rounds of the men’s second-tier competition have been rescheduled

NEWS: Overview of matches that have been postponed and rescheduled in the EHF European League Men

ROUND PREVIEW: Key clashes appearing already as the group phase heads into its second weekend

Offendal out of her comfort zone in Paris

FEATURE: Having quickly found her rhythm at her new club, the Danish international is ready to take on Herning-Ikast in the European League

Mixed fortunes for the French

DAY REVIEW: Paris and Astrakhanochka claim away wins in their opening matches, while Braila celebrate a home victory over Fleury