After 20 preliminary round matches at the M20 EHF Championship 2 2022 in Bulgaria, the competition will conclude this weekend with the placement matches, semi-finals and the final.

At the end of the preliminary round, group A winners Greece and group B winners Switzerland qualified for the semi-finals with perfect records of four wins from four matches. Despite losing to the winners of their respective groups, Israel and Romania earned three wins apiece to remain in contention for the title this weekend in Varna.

All matches will be streamed live on EHFTV.com. 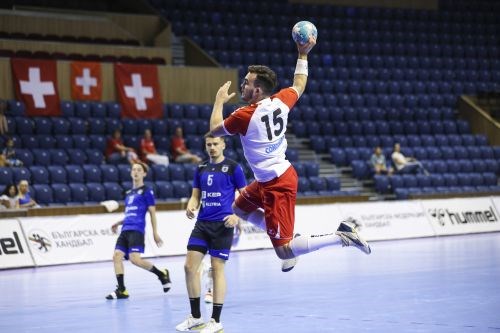 After opening group A with an 11-goal victory against Great Britain, Greece recorded what proved to be their narrowest victory of the preliminary round against Lithuania, 35:28, with Konstantinos Kotsionis top-scoring with 12 goals.

Greece concluded the preliminary round with authoritative wins against Israel and Luxembourg. However, Lithuania finished group A in fifth place after a surprise 31:24 loss to Great Britain and a one-goal defeat against Israel – 26:25. With the one-goal win against Lithuania on Thursday, Israel sealed second place in the group and booked their spot in the semi-finals.

In group B, Switzerland recorded double-figure wins in three of their four games. The sole exception to Switzerland's wide-margin successes came when they beat Romania 33:27 on Monday.

After remaining competitive in their match against Switzerland, Romania claimed a 31:21 victory against North Macedonia and a 33:25 win over Ukraine to reach the last four. Although the final score of Romania's win against Ukraine was convincing, the teams were level at half-time – 15:15.

Interestingly, although Kosovo finished group B in fifth place and did not earn any points, Ardin Berisha is the top scorer at the M20 EHF Championship 2 2022 after the preliminary round. Berisha's tally of 29 goals puts him one clear of Israel's Or Refael Levi. Kosovo will face Lithuania in the 9-10 placement match on Saturday.

Next Article Young Lokomotiva back to the top tier

FINALS REVIEW: North Macedonia mounted a late comeback in the final against Switzerland to claim the crown in Riga