Israel claimed the M20 EHF Championship 2 2022 title in Bulgaria after beating Romania, 38:36, in a thrilling final on Sunday that culminated in a penalty shoot-out.

With less than seven minutes remaining, Israel led by five goals, 32:27, but Romania scored six of the last seven goals to send the title decider to a shoot-out.

In the bronze medal match, Switzerland overcame a two-goal half-time deficit against Greece to clinch third place with a 26:23 victory.

On the final weekend of the M20 EHF Championship 2 2022 in Bulgaria, there was not one but two penalty shoot-outs that would contribute towards deciding the winners of the tournament.

In Saturday’s second semi-final, Romania ended Greece’s four-match winning streak with a 3:1 win in the shoot-out. For Greece, who a held a 30:27 advantage inside the last 10 minutes, missing their first three penalties of the shoot-out effectively ended their hopes of reaching the final.

While Romania enjoyed the thrill of winning a penalty shoot-out on Saturday, they experienced contrasting emotions in Sunday's final against Israel. For the second time in two days, Romania centre back Tamas Katona failed to convert a penalty in the shoot-out. Erik Leonard Pop, Ianus Dumitrescu and Alexandru Daniel Moldovan all stepped up to score again for Romania, but Israel clinched the title when Or Refael Levi scored their fifth penalty from five attempts. 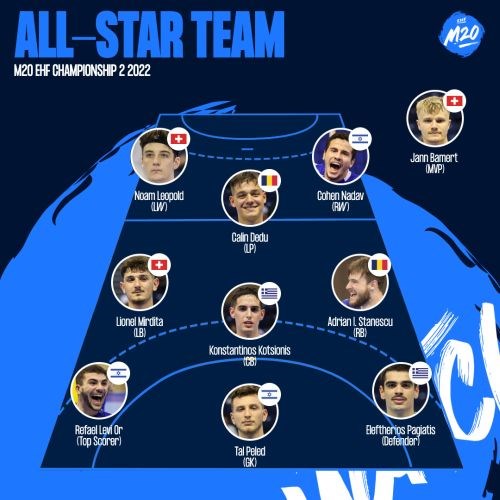